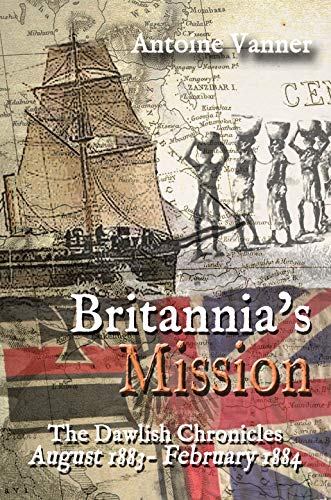 This is the seventh volume of the Dawlish Chronicles naval fiction series – action and adventure set in the age of transition from sail to steam in the last decades of the 19th Century.

1883: The slave trade flourishes in the Indian Ocean, a profitable trail of death and misery that leads from ravaged African villages to the insatiable markets of Arabia. Britain has been long committed to the trade’s suppression but now a firebrand British preacher is pressing for yet more decisive action. Seen by many as a living saint, and deliberately courting martyrdom, he is forcing the British government’s hand by establishing a mission in the path of the slavers’ raiding columns. His supporters in Britain cannot be ignored and are demanding armed intervention to protect him.

This ostensibly simple task is assigned to Royal Navy Captain Nicholas Dawlish and the crew of the cruiser HMS Leonidas. Previous assignments have proved him adept in coping with political complexities and his crew has been recently blooded by successful action off Korea. But this new mission quickly proves that it’s not going to be as straightforward as it seemed back in Britain . . .Two Arab sultanates on the East African coast control access to the interior. Overstretched by commitments elsewhere, Britain is reluctant to occupy these territories but cannot afford to let any other European power do so either. And now the recently-proclaimed German Empire is showing interest in colonial expansion, and its young navy is making its appearance on the world stage . . .

For Dawlish, getting his fighting force up a shallow, fever-ridden river to the mission is only the beginning. There are obstacles to confronting the slavers, and the missionary himself, and his associates, are not the least of them. And the German presence cannot be ignored, even though Germany’s objectives are unclear and its activities contradictory and baffling. And there’s a mysterious European serving one of the sultans and intent on bringing the slave trade to a new level of industrial efficiency. . .

For Dawlish and his men atrocities lie ahead, and battles on land and combat in swamp, and success will demand strange alliances to be made despite a fog of uncertainty. But, as the adventure reaches its savage climax, the ultimate arbiters will be the guns of HMS Leonidas and those of her counterpart from the Imperial German Navy.

Britannia’s Mission is more than a naval thriller or a tale of war and military conflict. As seventh in the Dawlish Chronicles series it reveals more about the career of a naval officer who is more familiar with steam, breech-loaders and torpedoes than with sails, carronades and broadsides. But now, in the 1880s, sail is yielding to steam, new technologies are creating new weapons and established international power-balances are shifting. Against the background of real historical events Dawlish has to confront challenges inconceivable to earlier generations of officers.

“I’ve enjoyed sea adventures since I was introduced to C.S. Forester’s Hornblower books when I was a boy,” says author Antoine Vanner, “and I’ve never tired since of stories of action and adventure. The Napoleonic era has however come to dominate the war and military genre but the century that followed it was one no less exciting, an added attraction being the arrival and adoption of so much new technology from the 1860s onward. My novels have as their backgrounds actual events of the international power-games of the period and Britannia’s Mission is no exception.”